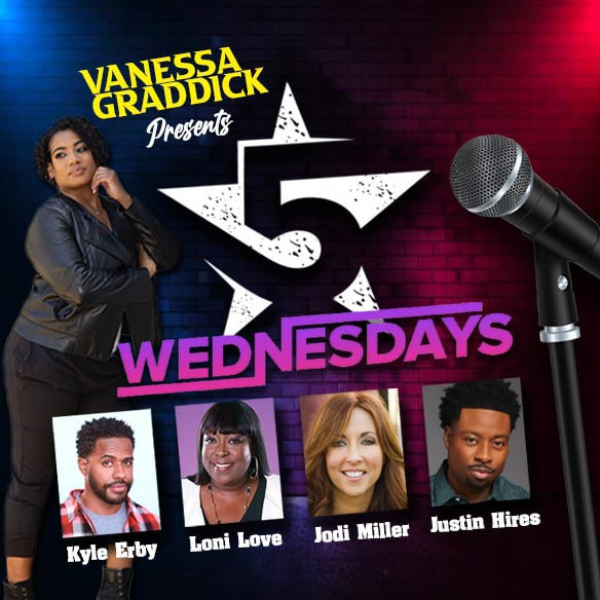 5-Star Wednesday is going to be a comedy show like no other.

It's not every day that you get the opportunity to see an all-star lineup of comedians, and we're going to make sure you have a great time!

Kyle Erby, Loni Love, Jodi Miller, and Justin Hires will be taking center stage unleashing loads of laughs from everyone. These comics are known for making you laugh til you cry. We're really excited about having them here—and we know you will be too!

Tickets are available now. Don't miss out on this hilarious evening with these hilarious comedians—it's going to be one heck of an experience! 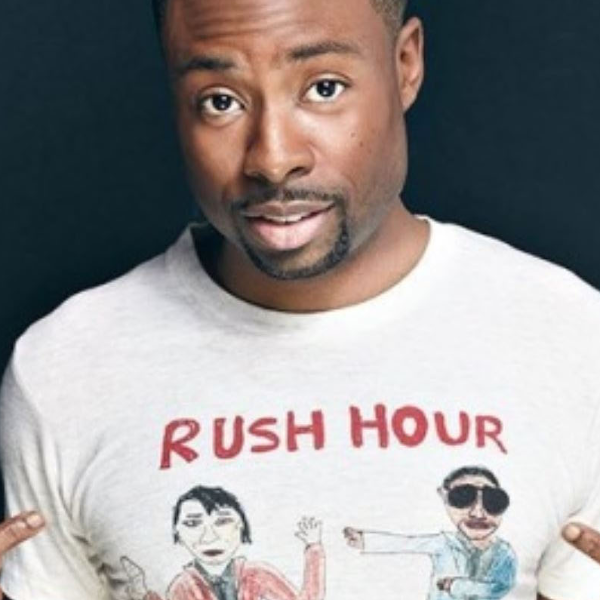 Justin Hires is a multi-talented artist.


Hires can be seen playing BOZER in the CBS reboot of MACGYVER. His past credits include starring as DETECTIVE CARTER in the CBS action/comedy RUSH HOUR, portraying JUARIO in the box office success 21 JUMP STREET, and recurring on Comedy Central's popular sketch comedy show KEY & PEELE. In between filming, Justin can be seen headlining his own nationwide stand-up comedy tour. Next up for Justin- conquering the hip hop world. He's gearing up to release his second hip hop mixtape under the moniker J. HIRES, entitled CHAPTER 2: He Rap Rap. Justin is also currently writing HALF BAKED 2 for Universal 1440 Entertainment.

Born in St. Petersburg, FL and raised by two very supportive parents, Hires always had an extremely notable gift to make others laugh. While attending college at Clark Atlanta University, Justin was cast in two feature films- STOMP THE YARD and THE GOSPEL.

After receiving his Bachelor of Arts degree in Mass Media- Radio, TV, and Film, Justin moved to Hollywood, CA. He started performing stand-up comedy and landing television and film roles, along with accumulating millions of views online with his personal sketches and vlogs.

Justin is determined to continue his pursuit of international stardom and is positioned to become one of Hollywood's elite brand names. 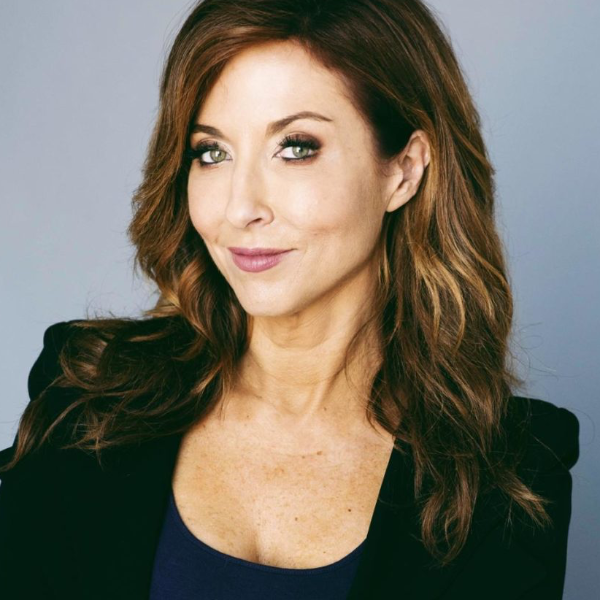 Host of the new show The World's Funniest Weather, Jodi Mille,r has been performing Stand Up comedy all over the country for over 20 years and has also done 4 military tours including going overseas to entertain the troops in Afghanistan.

She was on Season 9 of America’s Got Talent where she received a standing ovation from all four of the judges!

She recently performed on Gotham Comedy Live and is currently the head writer and on-camera talent for the syndicated game show Funny You Should Ask.

She was a reoccurring guest commentator on CNN’s Showbiz Tonight and has also been seen on The Tonight Show, Comedy Central, TRU TV, SyFy, GSN, and Playboy Plus.

Jodi was a writer on the Cinemax series Co-Ed Confidential for all four seasons and is the co-author of the WTF Series: WTF College, WTF Work & WTF Women SRSLY WTF, WTF America, and OMG GUYS, all available in stores and online now.

And just in case you were wondering, yes, she has a cat! JUST ONE CAT! 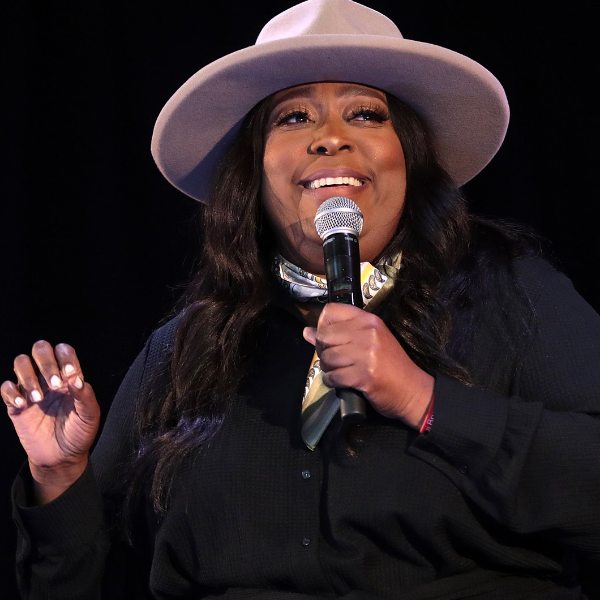 Loni Love is an American comedian, television host, actress, author, and former electrical engineer. While working as an electrical engineer in the early 2000s, she switched to music engineering, until later launching a career in stand-up comedy.

The busy Ms. Love is a proud ally for the LGBTQ+ community, she holds the 2022 WOWIE award for Best Queen Comedian. Love has been seen as a contestant on RuPaul’s Celebrity Drag Race, appeared as a recurring guest judge for Season 13 and 14 of RuPaul’s Drag Race, and served as keynote speaker for Vision Cathedral’s Convention advocating inclusion for all. She was a proud representative for the 2022 West Hollywood Pride Parade for Project Angel Food. She is now the cohost of Squirrel Friends, the official RuPaul Drag Race podcast Co-produced by MTV Entertainment Studios, iHeartRadio – the No. 1 podcast publisher globally according to Podtrac – and Emmy-winning media company World of Wonder. 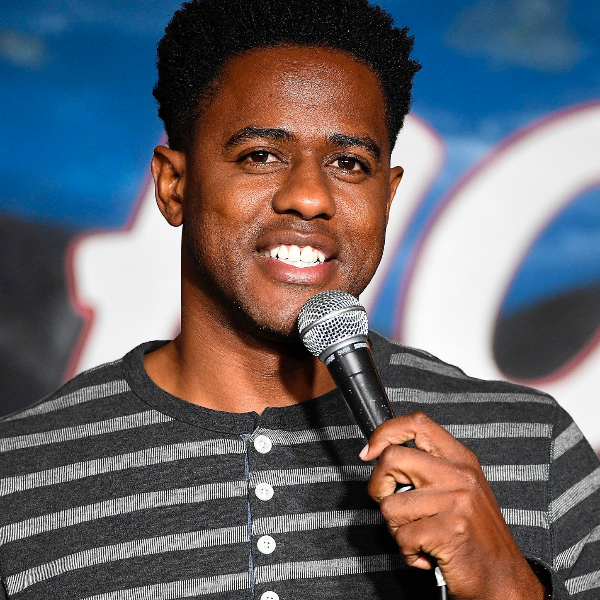 Kyle Erby is known as that guy from the Progressive “Man Cave” commercials. He can be heard daily on the internationally syndicated radio program, Sheryl Underwood Radio, and weekly on The MRA Podcast with Kyle & Kamal. He won Joke of the Day honors on TruTV’s Laff Mobb’s Laff Tracks for his stand-up performance “Black Folks Stick Together.”

Kyle is a MUST SEE for stand-up comedy fans. He is originally from Rialto, California in the IE (The Inland Empire, 60 miles east of LA), and was called "The IE's Funny Man" by the SAN BERNARDINO SUN and the INLAND VALLEY DAILY NEWS. The papers praised him for his ability to mix written material with improvisation to deliver a "custom show" to his stand-up comedy audiences. Kyle's specialty is breaking down relationships from his mannish point of view.

He started in show business as an intern at “The Tonight Show.” After being told by Jay Leno that he should try stand-up, Kyle left the Tonight Show to pursue his own career. 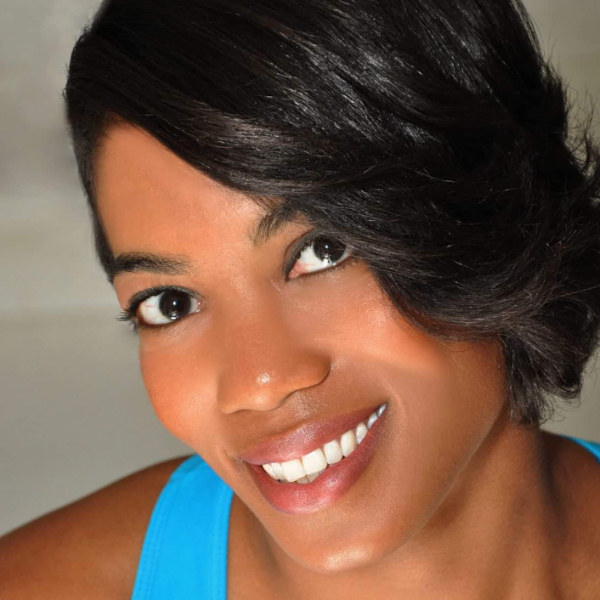 Vanessa Graddick was born in St. Paul, MN, where she grew up an athlete and performer and was involved in several social clubs. Before her career as a comedian, she was a Children’s Social Worker in both Minnesota and California. In January 2006, Vanessa moved to the City of Angels to see what else the world had in store. However, it was much more than expected. On November 1, 2006, her mother was diagnosed with Breast Cancer. Needing an instant distraction from real life, that very night, Graddick took to the stage, and the people laughed. Since then, this talented, driven, and most importantly, funny Stand Up Comedian has been taking comedy by storm. Though based in LA, Vanessa has performed all over the United States, including major Comedy Clubs in California, New York, Washington, DC, Pennsylvania, Florida, and more. Additionally, she has entertained American troops in Kuwait, Iraq, Korea, Japan, Afghanistan, and Kyrgyzstan.

Since then, Vanessa has been on Byron Allen’s Comics Unleashed, The Gossip Queens, Comedy Central's Live at Gotham, Showtime Network’s Lip Service, and NuvoTv’s Stand Up and Deliver, and BET’s Comic View. She has also appeared on The Real Husbands of Hollywood and Black Jesus. Not only has she made her presence felt on camera, but Vanessa also moved behind the camera as a Segment Producer on a celebrity news show, The Gossip Queens, and a producer on the hilarious game show Funny You Should Ask.

Vanessa's comedy is direct, fast-paced, and intelligent, with attitude and no regrets. Real life, real talk, and real funny!

With her introspective and thought-provoking comedy, Vanessa Graddick is proving quickly to be a name to watch out for.

5-Star Wednesday is going to be a comedy show like no other.

It's not every day that you get the opportunity to see an all-star lineup of comedians, and we're going to make sure you have a great time!

Kyle Erby, Loni Love, Jodi Miller, and Justin Hires will be taking center stage unleashing loads of laughs from everyone. These comics are known for making you laugh til you cry. We're really excited about having them here—and we know you will be too!

Tickets are available now. Don't miss out on this hilarious evening with these hilarious comedians—it's going to be one heck of an experience!