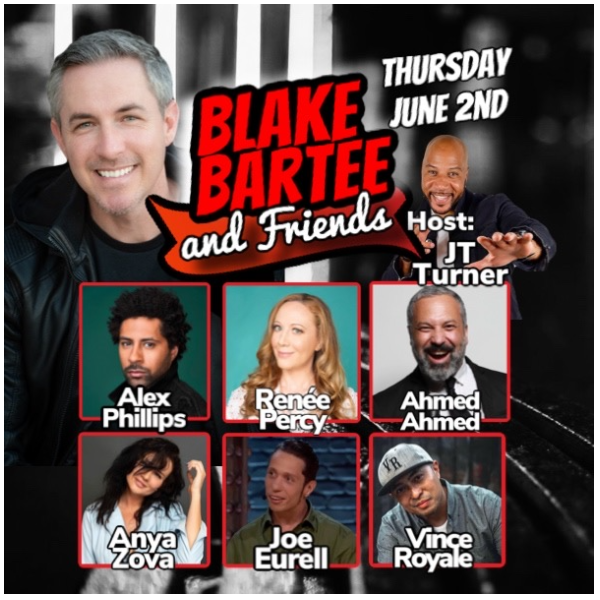 ​Blake Bartee brings his funny friends to Bellflower for an epic night of laughter.

Do not miss this!

An amazing night of laughter with an All STAR headliners You don't want to miss it! 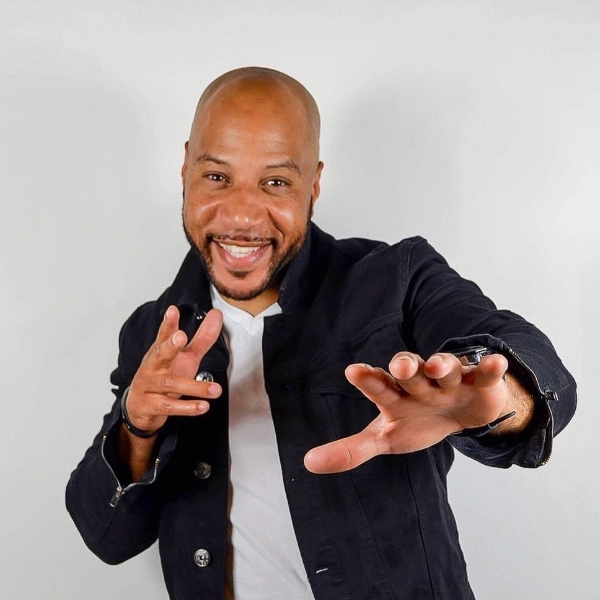 Comedian/Actor/Writer JT Turner, from Los Angeles, stardom is rising. His unique and charismatic style is

setting the comedy circuit on fire! He is quickly becoming a household name for his amazing work ethic and

his very distinct way of delivering laugher to his audience.

JT's high-energy and multi-talented wit is taking the game by storm. His magnetic personality and comedy

Bald Brothers Podcast" and Co-Host of the Roll Out Show Podcast. 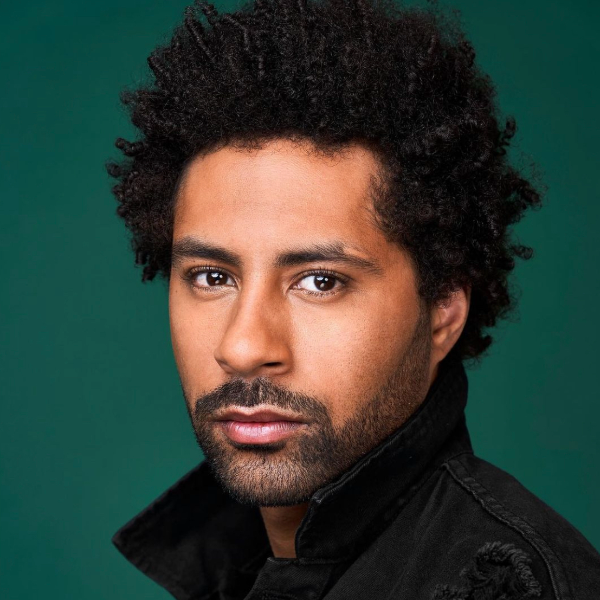 Alex Phillips began his comedy career in Chicago at the age of 19. Aside from appearing regularly all over Los Angeles and opening for headliners such as Anthony Jeselnik, Dave Chappelle and Bill Burr, you might have seen him on his acclaimed web series APARTMENT 9 which he co-created and starred in. Alex also starred in MTV’s docu-film NEW ORLEANS LOVE. Most recently, Alex created his newest series SNOW JOBS, an edgy comedy based at a ski resort. He can also be seen in national commercials. 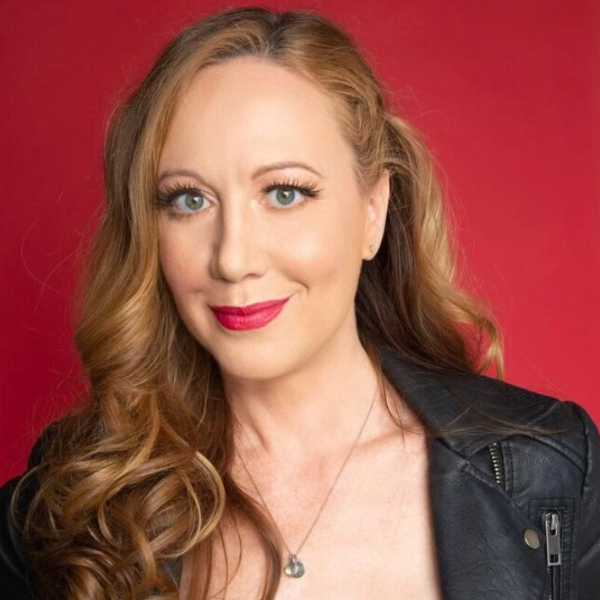 Renée caught the acting bug at age 12 when she landed a series regular role on the wildly popular television series DEGRASSI HIGH. Since then, she has appeared on, and written for, numerous television shows, has toured the country doing standup comedy, has received both a Canadian Comedy Award and a Phil Hartman Award, AND she is only one stamp short of a free yogurt at Pinkberry. She has opened for the likes of Jay Leno, Jeff Garlin, Bill Burr, Preacher Lawson, Jamie Kennedy, Orny Adams, Michael Rapaport, Arsenio Hall and Yakov Smirnoff to name a few, and can be seen performing sketches on Jimmy Kimmel Live. Originally from Toronto, Canada, Renée is now living the dream in Los Angeles and can be seen performing at The Improv, The Laugh Factory, Flappers Comedy Club, and The Comedy Store. 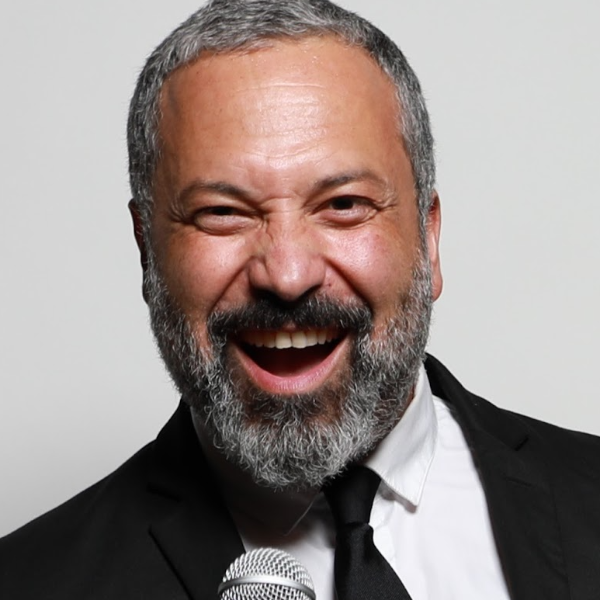 He has appeared in several films and television shows such as Executive Decision, Swingers, Tracey Takes On..., Roseanne, JAG, Tough Crowd with Colin Quinn on Comedy Central, and MTV's Punk'd with Ashton Kutcher. He would later joke about his part in Executive Decision in his standup routine for the Axis of Evil Comedy Tour. He has also appeared on CNN, The View, and National Public Radio, and was featured on the front page of The Wall Street Journal in December 2001, as well as in Newsweek. He was featured in the PBS television documentary America at a Crossroads series in "STAND UP: Muslim American Comics Come of Age", an episode about Muslim American comedians.

Ahmed Ahmed is a regular performer at The Comedy Store in Hollywood and tours all across the US and Europe. He was the winner of the first annual Richard Pryor Award for ethnic comedy at the Edinburgh Festival in Scotland in the summer of 2004. Ahmed was a member of the Axis of Evil Comedy Tour. He was also a notable guest for Axis of Justice which is a rock and heavy metal concert which fights for social justice.

He had a regular role in the TBS sitcom Sullivan & Son. 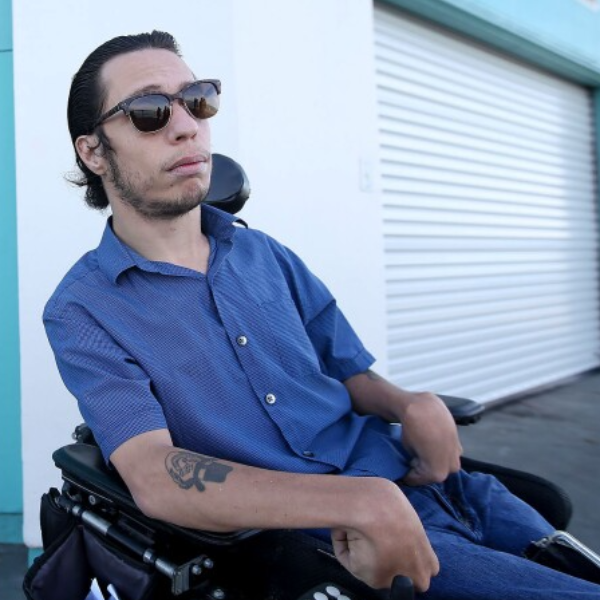 Like much comedy, Joe Eurell’s humor was born of difficult beginnings.

Bound to a wheelchair due to spastic cerebral palsy, Eurell grew up in South Carolina and was abused as a child. He was later separated from his four siblings and placed into foster care at age 10.

Two years later, a family from Huntington Beach adopted him.

“Even after I came out here and my adopted parents gave me this great life, I couldn’t enjoy it,” Eurell said. “It felt like I abandoned the people I loved.”

In 2005, while searching online for information about his oldest sister, he found out she had been looking for him for several years. Eurell was able to finally reconnect with his siblings.

“It was such an emotional block to be separated from them, not knowing where they were or how they were doing,” said Eurell, now 32. “These were people I spent every day with for 10 years. Then I spent the next 10 years without them. I felt incomplete. Reconnecting with them helped me find the artistic voice I needed to do comedy.”

Eurell dreamed of becoming a comedian since he was a child, when he saw the famed Sam Kinison perform, though he didn’t start his own comedy career until about six years ago.

“I sort of thought I don’t want to live my life with regret,” Eurell said. “I decided to try and overcome this speech impediment, the anger problem and the mental problems, and try comedy.”

While earning a degree in political science at Cal State Long Beach, Eurell performed every Monday at an open mic show at the Anchor Bar near Costa Mesa.

Eurell’s brand of “insult comedy” quickly endeared him to audiences and the comedy community.

However, it took a while for him to get used to comics poking fun at his disability. Eurell has some difficulty enunciating words, what he calls his “cerebral palsy accent.”

“Even after I got into comedy, I didn’t like the idea of other people laughing at my situation,” Eurell said. “People would make jokes about my disability to my face. For a very long time I took myself too seriously for somebody who wanted to be a comedian.”

Eurell developed a thicker skin after he started taking part in roast battles at the Comedy Store in Los Angeles. His regular performances eventually led to his appearance on the Comedy Central show, “Roast Battle.”

The show pits comedians against one another as they lob insulting jokes. Famous comedians judge the contestants.

“Being on the show was like an out-of-body experience,” Eurell said. “I was afraid I was going to screw up. I think the best part of the experience were the fajitas. We had them before the show. They calmed my nerves.”

“When a crowd sees someone who is disabled, as long as they have some element of humanity in them, they are going to be empathetic,” Cassidy said. “But I think he takes people out of that. People aren’t feeling pity for him once they hear him talking. He’s got that swag.

“I have seen him deal with hecklers where he’ll tell them off like he’s going to beat them up after the show. He’ll say it with a seriousness where you’re like, ‘Is he really going to attack this guy?’ ”

Tran and Eurell received a Battle of the Year award for a roast battle they competed in against each other at the Comedy Store.

“I think he has this amazing will and resilience,” said Tran, who is transgender. “I know personally that it’s hard to just leave the house and perform, and I don’t have the disability Joe does.

“He has these dreams of traveling and performing all over the place. The thrill of performing, there is nothing like it. Once you really embrace that, you’ll do anything you can to get on that stage. And I think that’s what Joe is going through right now.”

Eurell performs about two shows and a few open mics a week. He also recorded a comedy special, “Not Special,” last year at the Rec Room in Huntington Beach.

While there, he wrote a paper about issues with the public transportation system in Orange County. He called it “probably one of the most boring papers ever written.”

“I am blessed to say I am doing the thing I’ve always wanted to do with my life,” Eurell said. “It’s not something everybody gets to say, especially people who are severely disabled.”

“Contrary to what people thought, I wasn’t bothered by what Jeselnik said,” Eurell said. “What makes him great is he can insult you using as little words as possible.” 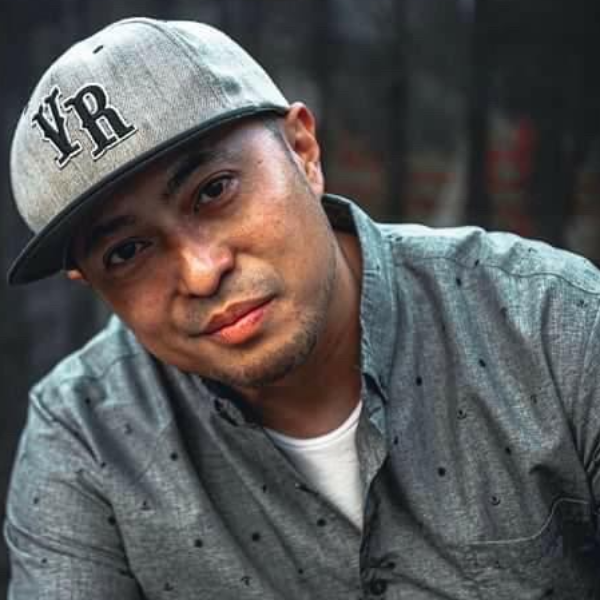 Jersey City native Vince Royale was always the class clown, though he never thought comedy would be his career.

Currently living in Los Angeles, the former homeless salesman turned stand up comedian/actor has been featured on the Netflix original series "Cooking On High" "Laughs" on Fox, “Stand Up and Deliver” on Hulu, "Not for Nothin" on Amazon Prime and currently on the horror comedy film "Attack of the Killer Donuts" on Showtime. Vince has been regularly performing in Los Angeles hot spots, New York night clubs, and touring internationally for over a decade. Vince is extremely down to earth and full of charisma and he has an uncanny ability to turn the things he sees into hilarity. 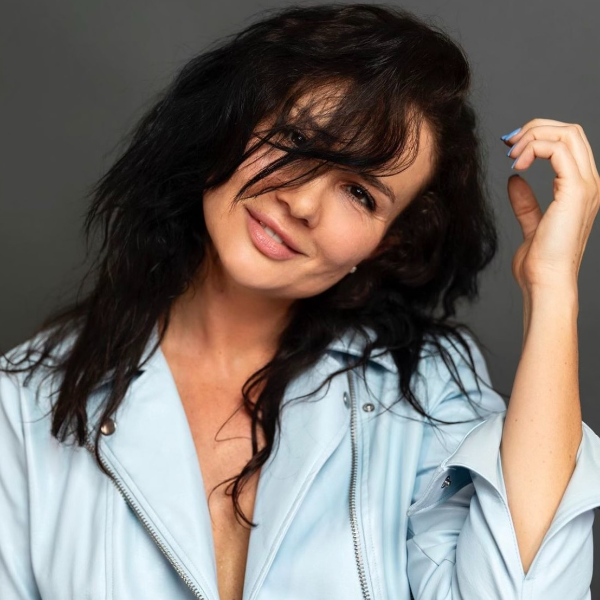 Anya is a stand-up comedian, actress and producer. Born in Russia and raised by Ukrainian mother and Russian father, where she became Kickboxing World Champion and graduated Law School at the age of 20, a year later moved to the United States to pursue her American dream. Shortly after relocating, Anya got signed with WWE and simultaneously began acting training. In 2020 Anya made her Television debut by appearing in the award-winning half-hour NBC comedy Brooklyn Nine Nine, the hit CBS series MacGyver, executive produced and acted in the TV pilot Wake Up, and will be starring in an upcoming music video with Ariana Grande. Currently touring the country with self produced Stand Up Comedy Show "Make Laughs Not War" , supporting Ukraine and uniting people through joy, peace and laughter. 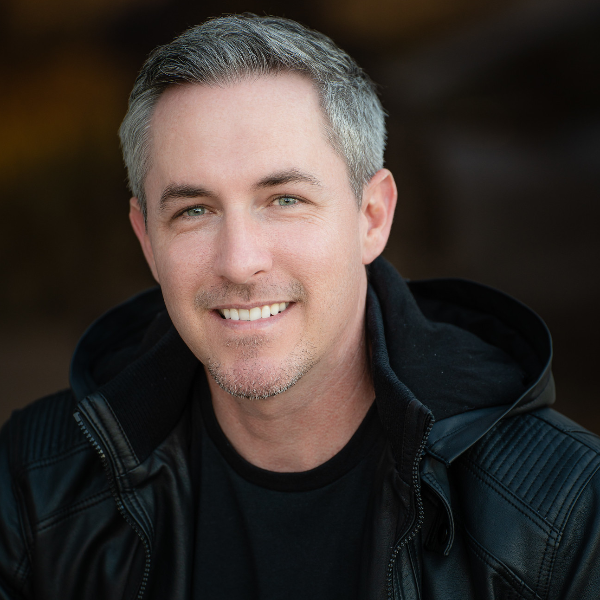 Blake Bartee is a Southern California native. Born and raised in Long Beach, his early years were spent as a DJ and break dancer. In 2006, Blake joined the Air Force, where he served for seven years as a medic. Based in Los Angeles, you can catch Blake touring the United States to perform stand-up comedy or co-hosting his weekly podcast, Hollywood Tales. His comedy is rooted in his childhood experiences, his family life, and his experiences with contemporary dating to name a few.

​Blake Bartee brings his funny friends to Bellflower for an epic night of laughter.

Do not miss this!

An amazing night of laughter with an All STAR headliners You don't want to miss it!