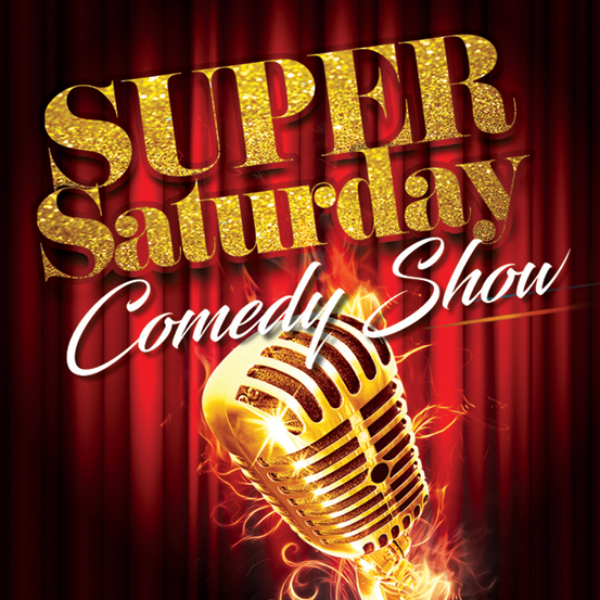 2 item minimum per person (combination of food or beverage)

No one under 21 allowed in.

Line-ups subject to change without notice.

All sales are final, no refunds.

Dustin Ybarra was seen most recently in recurring roles on the ABC series "The Goldbergs" and the CBS series "Battle Creek". Other television credits include a recurring role on the cable series “Californication” “Stand-Up Revolution” and “Live At Gotham.”
His recent film credits include “Hop ” “We Bought a Zoo ” “Gay Dude” and “21 & Over.”
Ybarra began his comedy career as a writer and performer in the online comedy troupe “Sucker Punch Comedy.”
Originally from Bedford TX Ybarra resides in Los Angeles.

He has made sixteen appearances as Karl Allard on Brian Koppelman, David Levien and Andrew Sorkin’s current hit BILLIONS on Showtime – Sean Collins of the NY Times (6/3/18) said of Allan’s performance “as always, a perfectly laid-back foil for Paul Giamatti’s measured bombast.” Other recent television appearances include GLOW on Netflix, Judd Apatow’s LOVE on Netflix, and BOSCH on Amazon.

Allan had ten guest spots on LATE NIGHT WITH DAVID LETTERMAN. He was featured in the COEN BROTHERS film HAIL CAESAR!, and guest-starred in Apatow’s CRASHING on HBO. Other television appearances include BOSCH, LOUIE, SEINFELD, THE OFFICE, CURB YOUR ENTHUSIASM, MAN IN THE HIGH CASTLE, 2 BROKE GIRLS, CODE BLACK, UP ALL NIGHT, THE SARAH SILVERMAN PROGRAM, FREE RIDE and MEN OF A CERTAIN AGE. He made numerous appearances as a guest commentator on THE KEITH OLBERMAN SHOW.

Originally from Miami, Allan arrived in New York City in 1978 and became a regular in comedy clubs around the city after “passing” at the legendary IMPROVISATION.

In 1984 he was cast by LORNE MICHAELS in THE NEW SHOW, working with STEVE MARTIN, JOHN CANDY, BUCK HENRY, GILDA RADNER and a host of others. In 1989 Allan was handpicked by HBO to be one of the initial hosts of The COMEDY CHANNEL, which later became COMEDY CENTRAL. He created, hosted, and produced NIGHT AFTER NIGHT WITH ALLAN HAVEY, which ran for three years and became a cult classic. During this period he also wrote and starred in two comedy specials for HBO; both were nominated for CABLE ACE AWARDS.

Allan’s film credits include HANCOCK with Will Smith, THE INFORMANT with Matt Damon, ROUNDERS with Ed Norton, INTERNAL AFFAIRS with Richard Gere, CHECKING OUT with Jeff Daniels, and the Jerry Seinfeld documentary COMEDIAN. He is also featured in the comedic documentary THE ARISTOCRATS.

Don McMillan worked for 15 years as an chip designer and engineer at AT&T Bell Labs, IBM, and VLSI Technology. Then in 1996, Don quit his job to become a stand-up comedian. That year he won $100,000 as the Comedy Grand Champion on “Star Search”. Don’s been seen on “The Tonight Show”, “HBO”, and the “Comedy Central”. These days, Don spends most of his time writing and performing customized corporate comedy shows for companies like Google, Apple, IBM, Ford Motors, Exxon/Mobil, and Mastercard. Don has performed more than 800 corporate shows in the last 20 years and he was named the #1 Corporate Comedian by the CBS Business Network.

Who is Jackie Fabulous?

Comedian Jackie Fabulous captured America’s heart as a semi-finalist on the 2019 season of America’s Got Talent. She’s got charms that can make even Simon Cowell blush, as she was the only contestant Simon walked on stage to hug! Jackie Fabulous is a hilarious and affable stand-up comedian, writer, actor, producer, motivational speaker, and headliner who uses her jokes and sparkling nature to simultaneously entertain, encourage, and empower audiences while keeping them laughing, and easily navigating the comedy gamut from family friendly to naughty. She is so comedically versatile, she could work a bar mitzvah, a bachelorette party, or your uncle's funeral.

Jackie’s standup has been featured on the Arsenio Hall show, Gotham Comedy Live, FOX, BET, Last Comic Standing, Kevin Harts LOL Network and more. And you may have seen her memorable talking head and hosting moments on the CW, and NBC’s “I Do.” In addition to her television appearances, Jackie Fabulous is a paid regular and headliner at most of the top comedy clubs in the country, including The Comedy Cellar, The Hollywood Improv, The Laugh Factory, The Comedy and Magic Club, and the House of Comedy and Funny Bone clubs.

“As the guy who discovered Jon Stewart, Ray Romano and a bunch of other star comics I have a sense of who has ‘it.’ JackieFabulous has it. I’d watch her do just about anything legal,” - Billy Grundfest (Founder of New York’s “Comedy Cellar”).

When Jackie is not on tour with her standup, you’ll find her giving insightful keynote speeches and breakout sessions at corporate events and conferences, to sold out crowds. Jackie is a former lawyer who has lived an incredibly full life filled with love, tragedy, embarrassing moments, and hard lessons and she channels all of the above into relatable material and inspiring speaking engagements. More than just a funny lady, she is on a mission to inspire and empower women all over the world to Find The Funny In Their Flaws. Her signature talks and upcoming book within her hilarious “Find Your Fabulous” series will leave audiences feeling encouraged, uplifted, and inspired to conquer the ups and downs of life and work.

Jackie is available for standup appearances and speaking engagements, and would make a great addition to any panel, talk show, TV show or movie that needs an extremely versatile, hilarious, and likable writer and actor. Jackie Fabulous will sparkle on any stage or screen; she always lives up to the name!

2 item minimum per person (combination of food or beverage)

No one under 21 allowed in.

Line-ups subject to change without notice.

All sales are final, no refunds.